Anyway, I liked him.  He reminds me of Mart.in Sh0rt.  But with glasses.  We talked about the 3 previous cycles we did and he said he would study all the records I brought him so that we can come up with the best plan of action.  He is going to change up my protocol a little, which I'm not thrilled about, but he said it's because of my age and he wants to get the best eggs possible.

I'm to call when I get my period in October so they can start me on bcp.  I'll have a uterine ultrasound done on the day we go in to sign the 6 inches of legal paperwork involved with IVF.  He does his IVF's in groups...so I'm set for the November group.  Which means a late November/early December ER and ET.  Just in time for the holidays.  Great! (enter sarcasm here)

I'm happy to get things moving.   But extremely nervous at the same time.  Knowing this is the last cycle.  Please G0d...
Posted by Amy at 8:58 AM 3 comments:
Labels: IVF#4

Kym over at The Smartness ran her Sock Exchange again this year and I finally decided I would participate.  The theme this year was :

It has been roughly a year and a half since the last SITM Exchange. Reflect on the past 18 or so months – how has support from others, either in the blogosphere or otherwise, helped you?


I can't even begin to describe what kind of support I've received over the last 18+ months.  Everything from advice on parenting, to virtual hugs during my miscarriage, to just saying "I hear you".  There are a number of women that I have "met" via this blog who I am now friends with over on that Social Networking site.  And who I feel really know me.  Even though we've never met face to face, or talked on the phone, I feel a kinship with them.  I laugh when they laugh, and I cry when they cry.  I haven't just received support over these last 18 months...I've made lifelong friends.  Friends I hope to meet face to face one day so our children can play (or get married lol!).   I'm not sure where I would be today if I hadn't decided to start this blog 4 years ago...

And my sock love comes from Molly over at McPolish!  Thank you Molly! I've already worn my socks a few times! 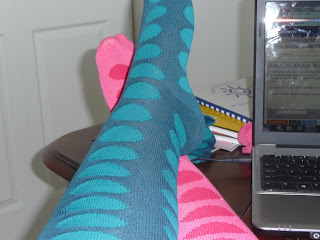 What do you do when you've lost all interest in sex?  That is where I am right now...and it's causing a huge rift between DH and I.  It's been over 2 months since our last initimate connection.  It's not for his lack of trying though.  I just don't ever feel "in the mood".  DH and I argue on a regular basis...and it all stems from our lack of sex life.  From my inability to give him what he desires...again.  What he doesn't seem to understand is that this problem is affecting me just as much as it is him...I'm just better at hiding it...of pushing it down into the recesses of my brain so that I don't have to feel broken again.  But broken is exactly how I feel.  And I suspect that it all stems from our IF diagnosis.   But I can't be 100% sure.  I mean, I know that is about when I began to lose interest.  Before we started seeing the RE, sex became something that was done at a specific time of the month in order to acheive a goal...having a baby.  When we had to start seeing the RE, I never was able to get back to the "sex for enjoyment" mindset I had before trying for a baby.  And it's snowballed from there.  And I don't know what to do about it.
Posted by Amy at 2:04 PM 6 comments:

Got my insurance referral

I received my insurance referral to the new RE today.  I also went for preliminary blood work this morning and I have to pick up my PAP results that are ready at my old OB's office.  The only thing I'm waiting on are my records from the old RE's office*

*Though I'm now not sure if IVF#4 is even going to happen.  Long story that I don't feel like posting about right now.
Posted by Amy at 3:53 PM 1 comment:

10 years have past...though it seems like yesterday.
I will never forget.
In memory of the almost 3000 lives lost...and the thousands of service men and women who have given their lives since...so that we may continue to live free. 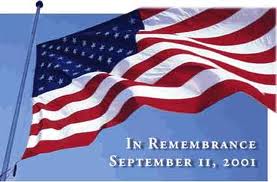 I've made my appointment to see a new RE for our last IVF cycle.  After much debate, we decided to go with this clinic.  Well, I decided...my DH is indifferent.  Why did I choose this one over the 3 others that the ob could have referred me to?  Well, one was ruled out because of the distance I'd have to travel for monitoring etc...an hour each way.  Plus, they didn't have very many cycles for women over 35 in their success rates on the CDC's website.  Like, they performed 1 in 2009.  The rest were all younger patients.  Another clinic was ruled out because of my personal feelings for one of the RE's in that practice.  I don't like her one bit.  She was my first RE...the one who left the clinic I was at and didn't tell any of her patients.  So that ruled out clinic #2.  So, I was left with the one I chose and one other one.  I ultimately chose this one because of it's University affliliation versus being a strictly private practice.  It's my opinion (right or wrong, it's mine) that University clinic's are more cutting edge and up to speed on the latest and greatest versus the private practices.  Again, right or wrong, it's my opinion and I'm entitled to it.

So in 10 days, I will meet with my new RE and go over the last 4 years of treatment.  I've requested my medical records from my old RE (to the tune of $50...what doctor charges that much??!!) as well as my OB.  I should have them in time for the appointment.

DH's insurance will lapse on February 29th next year...so we have to have everything done by then or else we'll have to pay for another year of his insurance coverage.  AF came on 9/2, so I'm hoping that I can start bc with my October period...and maybe, if I'm lucky, stims will start in November...which means a December ER and ET.  Not the greatest timing...but I would still have 2 months "play" in that schedule.

As for how I'm feeling...I'm nervous.  My previous RE got me pg both times I cycled there.  I hope this new RE will be open to following the same, or a slightly modified, version of my last protocols.  I'm just afraid he will change things up so much that if it doesn't work I won't know if it's because of the change in protocol or not.  Anyway, listen to me rambling...I haven't even met him yet.

Sock it to me!

I received my socks in the mail today!  Kind of amazing that they arrived so quickly...but I chalk that up to the fact that my sock sister is Molly, over here.  And since Molly lives in the same state as me...hell, she lives less than 50 miles from me...it explains why a package that was mailed on Saturday arrived on my doorstep today.

I LOVE them.  Thanks Molly!  I will think of you and all my blog sisters whenever I don them!

And my sock sister should be getting her package this week.  I was a slacker and just mailed them today :(.

Yea yea...I know I'm early in my post...and I have the whole reflection to do...but if I don't get something going now...it will be December before I remember!
Posted by Amy at 3:40 PM 1 comment:
Newer Posts Older Posts Home
Subscribe to: Posts (Atom)
All images are the property of justamereivf.blogspot.com and can not be reproduced or transferred without the expressed written consent of the blog owner...namely, me!