Thank you to everyone who commented on my big kid bed dilemma. The biggest problem I foresee is that when we put Lexi to bed, she plays/reads books for awhile before falling asleep. If she's not "contained" in her crib, I can see her wandering around her room and falling asleep somewhere other than her bed. Which really wouldn't be a big deal if she fell asleep...but after last night I'm more hesitant than ever. Those of you who follow me on FB know that I had 105 minutes of a screaming toddler at bedtime last night. She.would.not.go.to.sleep. I don't mind the playing in the crib...but this was all out tantrum. To the point of almost making herself vomit. I think I'll wait awhile longer.
Posted by Amy at 4:07 PM 1 comment:
Labels: big girl bed

We've had a big girl bed in Lexi's room for about 2 months now. It's a small toddler bed that takes the mattress from the crib. We've been talking about how big girls sleep in beds and little girls and babies sleep in cribs. Same logic we've been doing for potty training. Each night, we give her the option...bed or crib...she always picks crib. We don't speak down about the crib or make her feel bad about her decision. We simply ask, and when she points to the crib, we say ok and give her lots of hugs and kisses and put her in her crib and say nite nite.

Today, for her second nap, I thought I'd try to see if she'd lay in her bed...I knew she probably wouldn't sleep...but what I didn't expect was for her to stand at her door crying. I don't want to scare her from the bed...and if she's not ready then so be it...it's just weird because she will gladly lay in our bed, or in the guest bed, and have her "quiet time".

But my question for all those who have transitioned their kids to big kid beds...how did you do it? Was there any crying at the door? How did you keep them in bed? Did you start with naps and move to overnight? I have no idea how to do this.
Posted by Amy at 6:00 PM 9 comments:
Labels: big girl bed

I must be the most boring person alive. I've again let this blog slip. Another week and a half has gone by without any posts...and I fear that I've lost the readers I did have.

I started my new job on the 14th. I both love it and hate it. I love it for all the obvious reasons...I work from home, pay is excellent, benefits are good, people are nice, products are interesting to learn. But I also hate it because this company is rather new. 2 years new. Well, 2 years this summer...Lexi is older than this company. And like any new company they haven't ironed out all the kinks yet. The corporate directory is almost non existent...so finding anyone is difficult. They have multiple platforms and it seems that there is not one person who has access to all of the platforms...which completely flabbergasts me since those platforms contain information essential to our jobs. I'm also feeling a little lost. At my old job, I was the go to person...the knowledgeable one. I knew how to navigate inside that global company...but here, I don't know anything...it's a smaller company and I can't figure out how to navigate it.

I'll be honest and say that I'm also missing the daily interaction with people. I miss being able to turn around and ask the person across the aisle what they do in such and such situation. I knew that I wouldn't have that when I accepted this position...but I am having a hard time adjusting to it. I know I've only been "on the job" for 6 business days. I'm still in training. I know this information will come with time...I'm just not a very patient person when it comes to my career.

****************************************
On a seperate note, Lexi's 2nd birthday party is April 3rd. We are having it the week before her actual birthday so we can celebrate with just her and DH and I on her actual special day. I'm having alot of conflicting emotions about this birthday. For her 1st birthday I was excited and happy...this time around I'm a little melancoly. She's really becoming her own little person, and while I'm happy to see that, I'm also sad because I know my days as her number one person are numbered. She's growing up at a rate too fast for my heart to handle. If you don't believe me, just look at this photo... 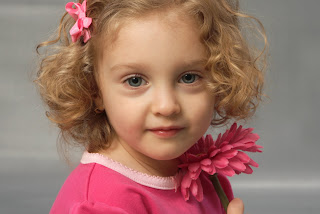 Tell me what about this says 2 year old??!! She looks so grown up in this photo, and so amazingly beautiful. I know I'm biased because I'm her mom...but I think she's stunning...I was just hoping for a few more "baby" photos.
Posted by Amy at 9:50 AM 3 comments:
Labels: 2nd birthday, new job

I can't call you a baby very much longer because you are in fact not a baby. You are an amazing little girl. I marvel each and every day that you are ours. I still get weepy thinking about how blessed I am to be your mama.

You are using your words more everyday. But still don't use them spontaneously. You will mimick us. Your speech therapist says you're getting better...and I see it. You have an appointment next week with an ENT to assess all the structures in your mouth, just to be sure there aren't any problems keeping you from speaking normally. You are also getting a hearing test. Also, just to be sure.

I can't beleive that we are going to be celebrating your 2nd birthday in less than a month. Where did the time go? How did I miss you growing up so fast? The good news is that I won't miss anymore of you. I will be here for you, when you start preschool...when you have your first soccer game or ballet recital...even when, God willing, that first boy comes calling. I'm so very excited and happy that I get to share those moments with you.

You are my everything. My miracle baby. My strength. It's because of you that I continued to look for better options than a 4 hour commute. I love you more than I can ever express.

Mommy
Posted by Amy at 9:19 AM 1 comment:
Labels: Letter to Lexi

I have four $5 coupons for Similac. 2 expire in June, and 2 expire in July. Will split if multiple people want them.
Posted by Amy at 9:16 AM 2 comments:

I've been noticeably MIA from this blog over the last few weeks. I've been so consumed with a bunch of different things that I neglected this blog. My apologies.

First up, I've been "out of work" since February 25th. I gave my notice to my employer, and since I'm going to a competitor, I was walked out. No big deal. I've had a two week paid vacation that I wasn't expecting. I start my new job on Monday. I'm excited and nervous. I will be working out of my house. I've received my blackberry, but not my PC yet. I hope it comes before the weekend so I can get it setup.

So because I'll be working from home, I've been trying to organize my office. The office was the one room in the house that didn't have any window coverings (we never really used it) so I went and purchased blinds to match the rest of the house. I also had to get a lateral file cabinet to store all my work papers in as well as a new desk chair. I've had a second phone line installed and everything is ready to go...just waiting on the rest of my equipment.

I've also been spending alot of time with Lexi. We're planning her birthday party for April 3rd...so I've been gathering Abby Cadabby decorations and planning the menu. I've ordered a kitchen set for her. It's the KidKraft Vintage Set in Bubblegum Pink. Yes, I ordered the brightest pink imaginable...but I know she'll love it. We did site to store shipping and it was delivered to the store this morning...so I'll be able to pick it up tomorrow or Friday. YAY!

Lexi also got a big girl bed...well, she's had the bed, we just put it in her room. She's still sleeping in her crib. I don't think she's ready yet. She loves her crib. We bought her new bedding and everything, but she still wants her crib. So, I'm in no rush to switch her. The empty bed sits in her room. She'll sleep in it when she's ready.

We've also digressed on our potty training. She's in a stage right now where everything has to be HER way. And right now, HER way does NOT involve the potty. So she's back in diapers. We'll try again in a week or so and see if she's changed her mind.

I think that's about it for now. I promise I won't let weeks go by until my next post.
Posted by Amy at 1:15 PM 1 comment:
Newer Posts Older Posts Home
Subscribe to: Posts (Atom)
All images are the property of justamereivf.blogspot.com and can not be reproduced or transferred without the expressed written consent of the blog owner...namely, me!